Looking to schedule an appointment. Please contact us and let us know when you would like to visit. 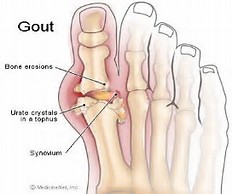 Gout is a painful condition that occurs when the bodily waste product uric acid is deposited as needle-like crystals in the joints and/or soft tissues. In the joints, these uric acid crystals cause inflammatory arthritis, which in turn leads to intermittent swelling, redness, heat, pain, and stiffness in the joints.

In many people, gout initially affects the joints of the big toe (a condition called podagra). But many other joints and areas around the joints can be affected in addition to or instead of the big toe. Uric acid crystals can also collect in the kidneys and cause kidney stones.

A number of risk factors are associated with hyperuricemia and gout. They include:

Renal insufficiency, or the inability of the kidneys to eliminate waste products, is a common cause of gout in older people. Other medical problems that contribute to high blood levels of uric acid include:

A number of medications may put people at risk for developing hyperuricemia and gout. They include:

Signs and Symptoms of Gout

Signs and Symptoms of Gout